Who Does Your Representative Represent?

I was already aware that my representative didn't represent me or most people I know and talk to around this part of the country. The needs of the people in this state are largely seen to at the town level, rarely but sometimes at the state level, and almost never at the federal level.

All this "by the people" and "for the people" stuff is so yesterday, don't you know? Besides, the current breed of Republican (who currently have Lincoln spinning like a top in his grave, I have no doubt) pays no attention whatsoever to things like the Constitution or individual rights. Those documents created when the United States was shiny and new are, like the Geneva Conventions, quaint. Where have I heard that before?

So who does my representative represent?

My representative is Jeb Bradley and apparently he represents ... Jeb Bradley.
Posted by zhakora at 5:56 PM No comments:

This hasn't been a good summer to be a New England baseball fan, especially not over the past month, which has left we of the Nation feeling like we'd been taken out behind Gate D and worked over with a sock full of Mannies.

Or something. Even the clever metaphors fail us now.

Usually around this stage of the fold, you start hearing the axe being sharpened and readied for the hapless manager's neck. The tumbrels might well have started rumbling long about the time of Boston Massacre '06, when the Yanks came thru and took five straight -- but interestingly, the Sox Faithful seem quite willing to cut Our Man Francoma a lot more slack than lesser men in the same position have earned over the years. Even the Boston Globe, which ordinarily would be rattling around the kitchen drawer looking for just the right knife, has acknowledged it's not Tito's fault the whole team has fallen apart. As Nick Cafardo points out in today's issue, the blame can be found upstairs.

Francona didn't get dumb this season. He manages and prepares the same way he always did. Instead of writing in Damon's name, he puts down Coco Crisp, a player who can barely throw the ball back to the infield. Instead of trotting out Pedro Martínez or Derek Lowe every fifth day, it's been Jon Lester, a 22-year-old rookie who went on the disabled list yesterday, and Kyle Snyder and Jason Johnson and Kason Gabbard. Yikes.

Management let Francona down, and he hasn't made a peep about it.

So, Theo, how about it? Making plans for this winter? 'Cause you're sure gonna have a boring fall.
Posted by lizmcl at 4:56 PM No comments: 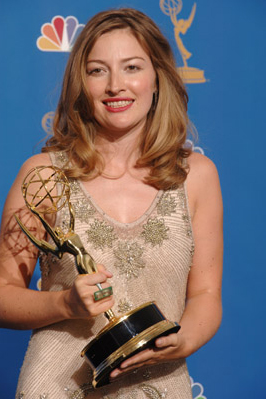 The lovely & talented Ms Macdonald, proving there is at least some slight justice in the world. (Wireimage photo)

... and so is The Girl in the Café. I really loved that movie (& have been a staunch admirer of Kelly Macdonald's for years) and was thrilled to see it win for best made for TV movie. It's sort of a little movie that could, given that though the backdrop is global in scope, it's a very intimate story of romance between two lonely people. And it's marvelous. Richard Curtis crafted a lovely script and the leads ran with it all the way to the finish line without taking the slightest mis-step. Bill Nighy (who should have been nominated -- and should have won) and Kelly Macdonald created a wonderful & unique chemistry in their portrayals of two lonely souls who meet by chance, and find some emotional kinship even as they lack any common ground whatsoever.

Macdonald was up for Best Supporting Actress in a miniseries or movie, though by rights she should have been up for Best Actress. I hadn't given her a chance in hell of winning, because she was up against a formidable array of talent (3 Oscar winners and an Oscar nominee). I was so very pleased that she won. (Even if she herself was not, saying afterward that she'd hoped someone else would win because it's all so "nervewracking.") For ten years, this woman has given a series of terrific performances, several standout performances (including her first role, as Diane in Trainspotting, and in the under-appreciated but absolutely charming Two Family House, amongst many others), and one absolute knockout performance (Stella Does Tricks). It's high time that she got a bit of acknowledgement for it.

In case you don't know, Macdonald is a petite Scottish actor from Glasgow who landed her first part via an open casting call. Playing Ewan McGregor's club pickup who turns out to be a schoolgirl, she has very little screen time in Trainspotting but gives such a remarkable performance that she's one of the things you remember most about the movie after the fact (her & the Worst Toilet in Scotland ... hmm ... well, anyway ...). She turned 20 the day the movie opened & has a talent for not just giving exceptional performances but also for choosing exceptional material, often very quirky material (the charming House! springs to mind), that ends up becoming a compelling finished project: A Cock & Bull Story, Tube Tales, Some Voices, Gosford Park, the superb television drama State of Play, to name just a handful.
Posted by zhakora at 10:38 AM 5 comments: 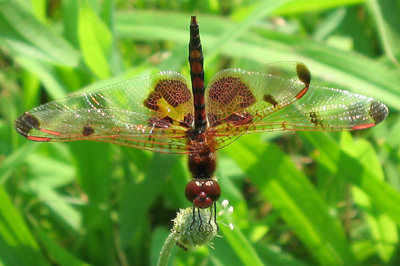 This poor little fellow was trying to beat the scorching heat here in the Northeast Wednesday by non-stop obelisking. Given the stiff breeze it wasn't always easy.

A Calico Pennant (male) taken with a Canon Elph series camera.
Posted by zhakora at 9:12 PM No comments:

Forget the big-time national pundits -- the real opposition to The Decider can be found at the grassroots, in the small towns and cities where more and more eyes are (finally) opening. This column in one of my local papers is a prime example.

Quite apart from what Bush’s actions say about the hypocrisy of his bombastic Christianity — a man who would “save” a bunch of useless cells as if they were human lives while green-lighting the “only democracy in the Middle East” to kill some 500 civilians, create 800,000 refugees, and destroy much of the infrastructure of an embattled nation caught in history’s crosshairs — Bush’s refusal to seek an early ceasefire has, once again, strengthened our enemies, weakened our friends, and made the US, if such is possible, even more disliked and distrusted by both friend and foe.

The big-timers couldn't have said it any better.
Posted by lizmcl at 9:00 AM 1 comment: