The pink flamingo is endangered.
Posted by zhakora at 6:07 AM No comments:

Turns Out, You Have To Worry About More Than Going Blind

Flora the dragon is going to have a bunch of little dragons. 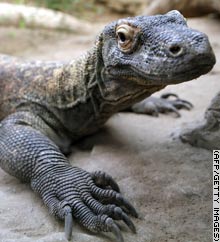 She looks awful pleased with herself, doesn't she?
Posted by zhakora at 11:21 AM 1 comment:

Come on kids, clap your hands

Does Bush have any credibility whatsoever with anyone? Anyone reality-based & sane, I mean?

President Bush acknowledged for the first time yesterday that the United States is not winning the war in Iraq and said he plans to expand the overall size of the "stressed" U.S. armed forces to meet the challenges of a long-term global struggle against terrorists.

As he searches for a new strategy for Iraq, Bush has now adopted the formula advanced by his top military adviser to describe the situation. "We're not winning, we're not losing," Bush said in an interview with The Washington Post. The assessment was a striking reversal for a president who, days before the November elections, declared, "Absolutely, we're winning."

Asked yesterday about his "absolutely, we're winning" comment at an Oct. 25 news conference, the president recast it as a prediction rather than an assessment. "Yes, that was an indication of my belief we're going to win," he said. [emphasis in original]

I'm surprised anyone in the media bothered to ask the question in the first place but not at all surprised that Bush "recast" his previous remarks to mean something different from what he said.

There's a big difference between "absolutely, we've won the lottery" and "my belief is we're going to win."

Maybe someone should tell President Tinkerbell.
Posted by zhakora at 11:59 PM No comments: