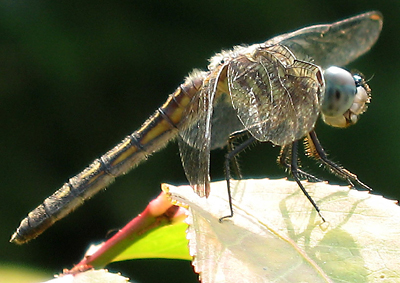 I think this is a female Blue Dasher (Pachydiplax longipennis). Blue Dashers are very common hereabouts & this particular one seems to frequent the same post office I do.

(Photo taken with a Canon Elph series camera.)
Posted by zhakora at 5:24 PM No comments:

A couple of things

Condi in Diplomatic Disneyland by Tony Karon, about how the US is managing the impossible and making things even worse in the war between Israel and Lebanon:

The problem with boycotting regimes you deem unacceptable is that if they are able to influence events, you're forced to respond to their initiatives, often in dangerous crisis moments. The U.S. and the Soviet Union were implacable foes who knew they could not resolve their differences, yet they maintained communication and developed understandings that allowed them to manage those differences in the interests of global stability. It is time for Bush the Younger to grow up.

Bush the Younger is sixty years old. At this point, it might be time to accept that he's a real world Peter Pan (only Peter had moments of selflessness & was at heart a good person) and is, alas, as grown up as he'll get, which is extremely bad news for anyone who cares anything about the United States or the world.

We now know, however, what happens when the USA is "led" by a man with all the psychological earmarks of a ten-year-old schoolyard bully whose parents never said no to him. A fascinating experiment, no doubt, only it's a shame it has to accomplished at such a high cost, isn't it?

The always entertaining & articulate Gore Vidal, interviewed by The Progressive.


Q: In 2002, long before Bush’s current travails, you wrote, “Mark my words, he will leave office the most unpopular President in history.” How did you know that then?

Gore Vidal: I know these people. I don’t say that as though I know them personally. I know the types. I was brought up in Washington. When you are brought up in a zoo, you know what’s going on in the monkey house. You see a couple of monkeys loose and one is President and one is Vice President, you know it’s trouble. Monkeys make trouble.

Q: Bush’s ratings have been at personal lows. Cheney has had an 18 percent approval rating.

Vidal: Well, he deserves it.

Q: Yet the wars go on. It’s almost as if the people don’t matter.

Posted by zhakora at 5:08 PM No comments: