Screening for Psychopaths in the Workplace

Canadian criminal psychologist Robert Hare came up with the Psycopathy Checklist evaluation that is the standard tool in determining whether a person falls into the one percent of all people who lack any sort of conscience.

He said that the recent corporate scandals could have been prevented if CEOs were screened for psychopathic behavior. "Why wouldn't we want to screen them?" he asked. "We screen police officers, teachers. Why not people who are going to handle billions of dollars?"

Psychopaths have a profound lack of empathy. They use other people callously and remorselessly for their own ends. They seduce victims with a hypnotic charm that masks their true nature as pathological liars, master con artists, and heartless manipulators. Easily bored, they crave constant stimulation, so they seek thrills from real-life "games" they can win -- and take pleasure from their power over other people.

Though the article is about corporate psychopathy, after the reading the above, I couldn't help but think that any future presidential aspirants here in the US might also be screened. Imagine what we could have spared the world had a screening mechanism been in place prior to the 2000 election.

(toth: the Sideshow)
Posted by zhakora at 2:50 PM No comments:

A rugby team during a match in New Zealand was helped along by a PA announcement that the Pope had died in a car accident, throwing off a player so badly that he missed a penalty kick.

This is what comes of a country whose population hangs onto the world upside down, by their fingernails ...

It was every Catholic's worst nightmare – and a hardy Wairarapa footy player's: the Pope's death announced as the kicker prepared his run-up in the last minutes of a semifinal.


The ground announcer's quip in the Wairarapa-Bush club rugby semifinal might have helped cost Marist a place in the final.

Marist's Paddy Rimene was lining up a penalty kick in front of the posts – aiming to give Marist a victory over Gladstone. The score was 10-10.

Moments before his run-up, a voice over the loudspeaker declared the Pope had died in a car accident. As Rimene's kick bounced off the post, the loudspeaker announced the Pope was in fact fine and the accident was only a fender bender.

Gladstone won 13-10, with a penalty conversion in extra time.

Mr Rimene – who usually nails his kicks – admitted being "really annoyed" by the comments.

Coming on the heels of the tremendous critical success of The English Patient, Anthony Minghella's Cold Mountain seemed to have found critics suffering from a surfeit of Miramax "special" movies and the film didn't do as well as (I think) it should have. One objection to the story line that was often raised by critics was that the lovers Ada & Inman simply didn't know each other that well, and thus the journeys both face (in very different ways) to be reunited lacked the resonance that it would otherwise have. Have none of these critics read Romeo & Juliet? Or maybe seen one of the more or less faithful adaptations thereof? It's not the quantity, folks, it's the quality. I had seen this movie back after its initial release, but recently re-watched it and realized that it's a very good movie indeed. 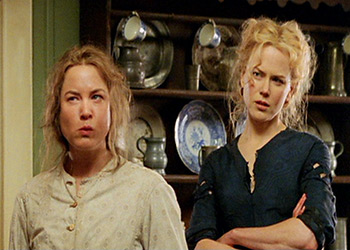 (I'm a sucker for those female-bonding flicks anyway ...)

The box office returns this year have been pretty putrid -- Hollywood is fatuously blaming things like dvd rentals and so forth for the slump, rather than taking a good long look at the disastrous effect the Bush regime's foreign policies are having here in the States (& especially at the gas pumps). When you start to feel that you can't afford to buy gas, things like going to the movies tend to fall by the wayside. A domino effect that I can see gathering much momentum in the coming months, especially as winter starts to take its toll in the north. I'm disgusted with what's been allowed to happen to democracy in this country and only see a grim outlook for the future.
Posted by zhakora at 1:33 PM No comments:

My blogmate and best buddy has a book out. Please give it a look.
Posted by zhakora at 1:23 PM No comments:

This came via that high-hopping kangaroo, Skippy, who needs two million hits. (Congrats to Skippy the Bush Kangaroo on passing the one million mark.)

top 10 reasons dorothy was greeted as a liberator ...and our army wasn't

10. the wicked witch of the east actually had weapons of mass destruction.

7. evil oppressor legally verified as "really most sincerely dead" rather than "maybe dead."

6. dorothy got it that she wasn't in kansas any more.

5. did not install toto as interim governor of munchkinland.

4. went home as soon as possible.

3. no interest in munchkinland's natural resources.

2. dorothy wasn't taking orders from the one with no brain.

Frank Rich on Bush and the Plame outing

I haven't seen this idea put forth by anyone else, but it makes perfect sense.


But the scandal has metastasized so much at this point that the forgotten man Mr. Bush did not nominate to the Supreme Court is as much a window into the White House's panic and stonewalling as its haste to put forward the man he did. When the president decided not to replace Sandra Day O'Connor with a woman, why did he pick a white guy and not nominate the first Hispanic justice, his friend Alberto Gonzales? Mr. Bush was surely not scared off by Gonzales critics on the right (who find him soft on abortion) or left (who find him soft on the Geneva Conventions). It's Mr. Gonzales's proximity to this scandal that inspires real fear.

As White House counsel, he was the one first notified that the Justice Department, at the request of the C.I.A., had opened an investigation into the outing of Joseph Wilson's wife. That notification came at 8:30 p.m. on Sept. 29, 2003, but it took Mr. Gonzales 12 more hours to inform the White House staff that it must "preserve all materials" relevant to the investigation. This 12-hour delay, he has said, was sanctioned by the Justice Department, but since the department was then run by John Ashcroft, a Bush loyalist who refused to recuse himself from the Plame case, inquiring Senate Democrats would examine this 12-hour delay as closely as an 18½-minute tape gap. "Every good prosecutor knows that any delay could give a culprit time to destroy the evidence," said Senator Charles Schumer, correctly, back when the missing 12 hours was first revealed almost two years ago. A new Gonzales confirmation process now would have quickly devolved into a neo-Watergate hearing. Mr. Gonzales was in the thick of the Plame investigation, all told, for 16 months.

Via Mahablog, comes a link. The funniest thing I've seen in some time: Revenge of the Sith, or Backstroke of the West. George Lucas better watch out.
Posted by zhakora at 12:50 PM No comments:

Compassionate conservatism at its finest.
Posted by zhakora at 8:24 AM No comments:

(fwiw, Roberts scares me silly. The scales of justice aren't meant to be tipped, folks, whatever the folks on the right might desire.)
Posted by zhakora at 7:38 AM No comments: