This [present U.S.] government is a threat to humanity. I have confidence that the American people will save humanity from this government -- they will not allow it to [continue to] violate human rights and to invade countries.

Alan Rosenberg has been elected president of the Screen Actors Guild. He is married to one of my favorite actors, Marg Helgenberger (under-utilized but still fantastic on the monster hit CSI, but who absolutely shone on the shamefully under-appreciated China Beach). Good for him, I hope he does well.
Posted by zhakora at 8:50 AM No comments:

Antiwar protest sign: Make Levees, Not War.
Posted by zhakora at 8:49 AM No comments:

It's been nearly impossible to post lately, for a lot of reasons (many of them related to a lass named Katrina, but not limited thereto).
I shall be ordering oil today, since the big oil people will be once again using natural disaster in the gulf region to kill off the middle class by price gouging. As Hurricane Rita does her thing down in Louisiana and Texas, the big oil people will be wreaking even more damage across the rest of the land. We have this to look forward to. Bush will be leading the vanguard from his position on the front lines – Northern Command in Colorado Springs.
Rumor has it that he's back on the bottle, due to the grief he feels over every death in Iraq, etc etc. The idea that he feels grief is certainly a novel one, and not one that holds up under any sort of scrutiny. If it is grief he feels, however, I would say it is the grief, coupled with frustration, felt toward his tanking poll numbers & the growing intransigence of even his own party members. My God, how dare they? Don't they know he must cement his place in American history as the best of the best? Eviscerating Social Security is a tough job, he can't do it alone. Don't they realize that? Since he is not someone who takes being thwarted well, toddler tantrums are waiting in the wings, most recently evidenced by his linking the Osama crowd (those nasty BAD terrorists) with the even-more-devastating Hurricane Katrina (nasty BAD weather). Both BAD, you see. BAD BAD. To the mind of a 4 year old, this is all the link necessary. (This also can easily explain away the illegal invasion of Iraq in terms that might more accurately convey why we're doing what we're doing, than whatever the current justification for the invasion is this week.)
Posted by zhakora at 1:37 PM 2 comments: 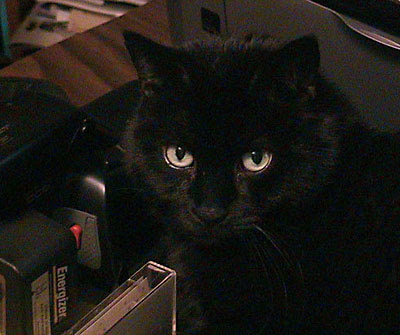