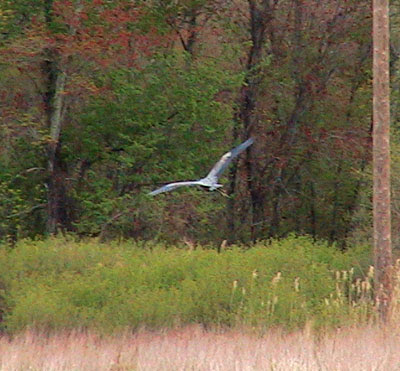 I (unfortunately) disturbed this very large fellow in Amesbury MA recently.
Posted by zhakora at 4:55 PM No comments: 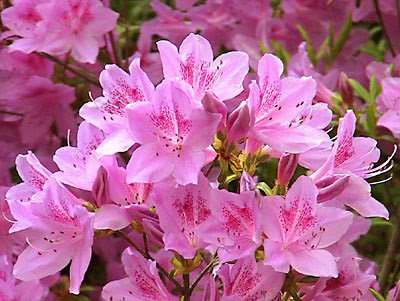 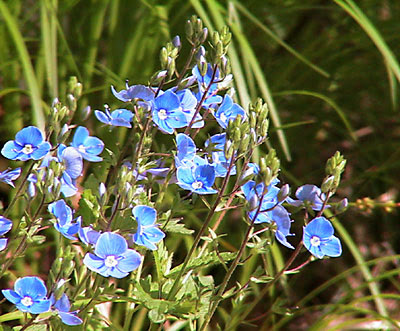 Both pictures were taken today in New Hampshire. It's been a terribly cold and rainy spring in this area and today was the first really decent day in a long time.
Posted by zhakora at 4:54 PM No comments:

The adult looks a lot like my feline companion, Miss Jessica, but I think she'd draw the line at being photographed with a little kitten.

(toth: Boingboing, which has a kitty roundup, and also the gosh-darnedest Star Wars-related link I've ever seen.)
Posted by zhakora at 12:39 PM No comments:

Forget about oil, forget the evil-dictator thing, forget about the intricacies of middle-east politics. All you have to do is take one look at the Saddam In His Tighty Whities photos to see exactly why Bush has such a problem with him. "Who do you think you are, Mister Big Stuff?"

Personally, I think he's packing. Which wouldn't be surprising, since Bush is the sort who'd be intimidated even by a rolled up sock.
Posted by lizmcl at 12:11 PM 1 comment:

An excellent (& for today's senate, unusually eloquent) rebuttal from Max Baucus regarding Santorum's puzzling & historically inaccurate rhetoric on the senate floor yesterday comparing the Democrats to Hitler. (Comments below the post worth reading too.)

Santorum is stupid. I would suggest he try a history primer, but I rather suspect some of the concepts and big words would defeat him.
Posted by zhakora at 11:05 AM No comments:

Molly Bingham, freshly home from Iraq, gives a speech.
Posted by zhakora at 2:17 PM No comments: 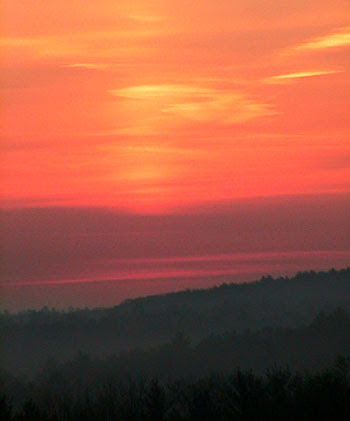 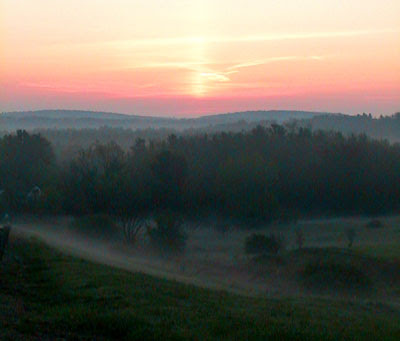 Posted by zhakora at 5:48 AM No comments:

Steve Clemons at the Washington Note has been doing a great job keeping interested observers up to date on the John Bolton nomination. Excerpts from a recent post:

In the Fall of 2004, John Bolton was given the task of communicating U.S. admninistration policy on Iran -- and commenting on the prospect and process of European negotiations with Iran -- at a Washington meeting of certain G8 principals.

...Bolton simply "quickly stated administration policy and that was it. He stopped. No more discussion. He gave 'one read' of the policy and refused to do more."

In other words -- and I have confirmed this bizarre incident -- John Bolton read the administration's policy from a prepared text, but he refused to distribute that text -- and he refused to read the statement again.

He had read the statement once, fast -- and would not read it again.

Excerpts from The Rise and Fall of the Third Reich by William Shirer:

... the Germans had drawn up proposals and Ribbentrop [Joachim Ribbentrop, German Foreign minister, later found guilty and hung for war crimes after the first Nuremberg International Military Tribunal] now proceeded to read them.

He read them in German "at top speed, or rather gabbled to me as fast as he could, in a tone of utmost annoyance," Henderson [Sir Nevile Henderson, British ambassador to Germany in 1939] reported.

"Of the sixteen articles I was able to gather the gist of six or seven, but it would have been quite impossible to guarantee even the exact accuracy of these without a careful study of the text itself. When he had finished I accordingly asked him to let me see it. Ribbentrop refused categorically, threw the document with a contemptuous gesture on the table ..."

It's worth pointing out, I think, that Bolton was "conferring" with allies.

Miss Keesa, Living On The Edge...
Posted by lizmcl at 7:13 PM No comments:

Last week, Donald Rumsfield kicked off the "America Supports You" campaign, unveiling the latest strategy for support of stressed-out, overworked US troops sadly depleted in armor and other provisions.

“This is about supporting the troops who are supporting our country all across the world,” Rumsfeld said. “I present to you – Spiderman!”

Spiderman did have a snappy, if ill-advised, new salute for the troops: 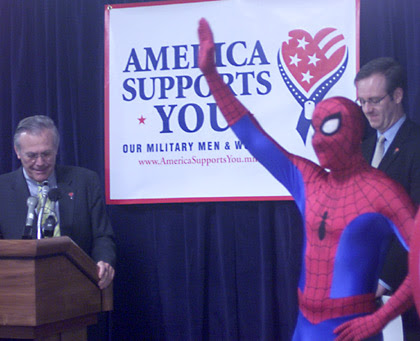 So how is the US government showing their support of the troops?

Well, there was a vote in the senate a few days ago where an additional 213 million dollars was set aside for the manufacture of (properly) armored humvees. The vote breakdown was 61 yeas, 39 nays. The 39 nays were 1 democrat and 38 republicans. (Including, I'm ashamed to say, both senators from New Hampshire. And, oh yeah, presidential hopeful Bill Frist, kitty-killer kompassionate konservative.)
Posted by zhakora at 4:00 PM No comments: 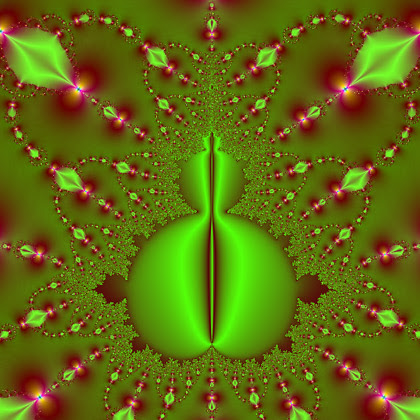 Stumbled across this unusual take on the Mandelbrot lake.
Posted by zhakora at 3:26 PM No comments:

From the Washington Post, an excellent piece by E.J. Dionne Jr.
Posted by zhakora at 1:33 PM No comments:

The Hyprocrisy Might Be The Worst Thing Of All...

From AMERICAblog comes the touching story of a "family values" politician and his rage when his little "something on the side" is a bit late.

This will have to do until Elizabeth's book is out (real soon now!).

Everybody was Kung Fu Fighting ...

The Elizabethan half of this blog was initiated into the club of those who've seen the light (and the flick) yesterday and wrote me this afterward:


I have never seen anything like that, and I don't imagine I ever will
again.


It came across to me very much like the director must've watched nine
straight hours of Tex Avery cartoons, eaten an enormous Szechwan dinner,
and then went to bed to have deeply disturbing dreams. And that was the
genesis of the script.

Posted by zhakora at 5:03 PM No comments: 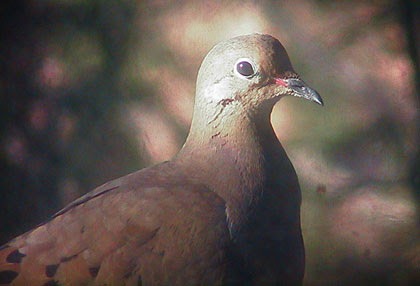 This young lady has been nesting in the window sill of my office. I've been playing Ella Fitzgerald, Mozart & the Beatles for her family's cultural edification while they stare at me, bemused & aghast. Sadly, her hatchling has not survived, poor little thing. (It didn't have anything to do with the music, though.)
Posted by zhakora at 4:59 PM No comments:

A Couple of Blogs

This one has the coolest name ever: My Karma Just Ran Over Your Dogma.

And this one is the blog of a fellow Apophysis / graphics enthusiast: She Dreams in Digital.
Posted by zhakora at 3:48 PM No comments:

From the New York Times

I've lost a lot of respect for the New York Times, especially over the last few years (though it goes back much further than that, since I was involved in a story in 1981 that they mis-reported badly, so I already knew they were far from perfect). Their op-ed page is still pretty good, and today there are two pieces that are worth reading: Paul Krugman debunks the latest plan for "saving" Social Security, and Bob Herbert writes about the ugliest Americans, currently representing the US in Iraq.

From the Herbert piece:


Mr. Delgado said he had witnessed incidents in which an Army sergeant lashed a group of children with a steel Humvee antenna, and a Marine corporal planted a vicious kick in the chest of a kid about 6 years old. There were many occasions, he said, when soldiers or marines would yell and curse and point their guns at Iraqis who had done nothing wrong.

He said he believes that the absence of any real understanding of Arab or Muslim culture by most G.I.'s, combined with a lack of proper training and the unrelieved tension of life in a war zone, contributes to levels of fear and rage that lead to frequent instances of unnecessary violence.

In November 2003, after several months in Nasiriya in southern Iraq, the 320th was redeployed to Abu Ghraib. The violence there was sickening, Mr. Delgado said. Some inmates were beaten nearly to death. The G.I.'s at Abu Ghraib lived in cells while most of the detainees were housed in large overcrowded tents set up in outdoor compounds that were vulnerable to mortars fired by insurgents. The Army acknowledges that at least 32 Abu Ghraib detainees were killed by mortar fire.

Mr. Delgado, who eventually got conscientious objector status and was honorably discharged last January, recalled a disturbance that occurred while he was working in the Abu Ghraib motor pool. Detainees who had been demonstrating over a variety of grievances began throwing rocks at the guards. As the disturbance grew, the Army authorized lethal force. Four detainees were shot to death.

Mr. Delgado confronted a sergeant who, he said, had fired on the detainees. "I asked him," said Mr. Delgado, "if he was proud that he had shot unarmed men behind barbed wire for throwing stones. He didn't get mad at all. He was, like, 'Well, I saw them bloody my buddy's nose, so I knelt down. I said a prayer. I stood up, and I shot them down.' "

The Few, The Proud, The Illegal

Texas and them nasty queers

(Why are these white southern men of a certain age so obsessed with gays? Anybody wanna take a wild guess?)

Yes, I know not all southerners are crazy moonbat loons, but, people, you did vote these guys into a position of power.
Posted by zhakora at 11:24 AM No comments: